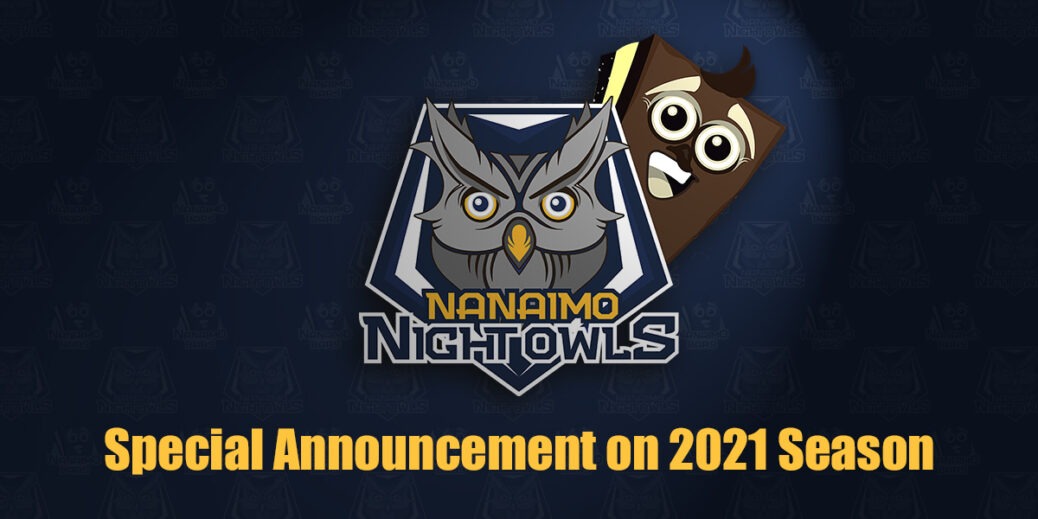 Four Canadian WCL teams announce they will sit out 2021 season.

The virus continues to win — in life, and in sports.

With great sadness, following extensive evaluations and consultations with Canadian West Coast League (WCL) teams in Kamloops and Edmonton, the ownership group that leads both the Nanaimo NightOwls and the Victoria HarbourCats is announcing the cancellation of their 2021 seasons due to the continuation of the COVID-19 pandemic.

For the HarbourCats, this will be the second, devastating season in a row with no baseball at Wilson’s Group Stadium, while the NightOwls were gearing up and looking forward to their inaugural season in the league under the brand-new lights at historic Serauxmen Stadium in Nanaimo.

The Edmonton Riverhawks and Kamloops NorthPaws were also looking forward to their first year in the league. The Kelowna Falcons previously announced their withdrawal from the 2021 WCL season in March. The 10 U.S.-based WCL teams, thanks to more effective vaccine roll-outs and COVID-19 mitigation efforts in Washington and Oregon, will be playing a modified, U.S.-only schedule, with teams being allowed to have fans in some capacity.

Unfortunately for the Canadian teams, given the ongoing nature of the pandemic — the recent rise in case numbers and variants,  the Provincial Health Officer’s guidelines and current and possible future restrictions in both British Columbia and Alberta, along with the ongoing Canadian-US Border closure — ownership felt they had no other choice but to cancel the 2021 season.

“There are simply too many things working against us,” said Jim Swanson, currently the GM of both the HarbourCats and the NightOwls. “We certainly appreciate the efforts of the NorthPaws and Riverhawks in truly exploring all options for a 2021 season, they will be great additions to the WCL and the Canadian side of the league, now starting in 2022.”

“We are also very appreciative of both our fan base and our sponsorship base, who have continued to support both teams and remain patient,” added Swanson.  “The groundswell of support in Nanaimo has been nothing short of tremendous, with major partners such as Island Savings, Save On Foods, Panago on Fourth, and Mid Island Co-op to name a few, coming on board as inaugural partners. And in Victoria, we appreciate that the long-time partners we have cultivated over the last few years, are sticking by our side and will be ready to roll again in 2022.

“This is hard on our staff and coaches, and we now give players time to find places to develop further this summer, likely somewhere in the U.S. Make no mistake — the HarbourCats will be back at Wilson’s Group Stadium, and the NightOwls are going to get off the ground in 2022.”

Fans who have purchased tickets, or ticket vouchers for both HarbourCats and NightOwls 2021 games, will receive full value for their purchases. Season Ticket holders who have paid in full, will automatically have their tickets rolled over into the 2022 season.  Fans with 2020 or 2021 specific game tickets (HarbourCats) or 2020 or 2021 flex pack vouchers (both teams), will be able to redeem those for tickets into the 2022 season once that schedule is announced.

With regard to the 2022 schedule, there is hope that the league makes developing that a priority over the next few weeks, despite the fact that the 10 U.S. teams will be playing in 2021.  “One of the best things that the league can do for the Canadian teams right now, in fact for all the teams, ” said Christian J. Stewart, the HarbourCats Assistant GM, Ticketing and Media, “is to develop and release a 2022 schedule as early as possible.  In that way, our teams can immediately start marketing and planning for that schedule, rather than having to wait until the late fall, when the WCL schedule is traditionally released.”

Both the HarbourCats and the NightOwls will continue to build to what will certainly be a celebratory return to baseball in 2022 and will find ways to add special events when allowed to do so.  Season tickets, 10-game flex packs, gift cards and merchandise will continue to be available for both teams, and new sponsors are of course welcome to join both teams and be part of that celebration.  Substantial stadium improvements will continue in Nanaimo and both teams will continue to be involved as key members of their communities.

“While it will be another tough summer missing our fans, the excitement of the game and the fun things we do at the park,” noted Stewart, “we know that our fans and those in Nanaimo will be back in force in 2022 and that is the motivation that we will all use to get us through this.  Opening day in 2022 is going to be one heck of a party and we can’t wait to see everyone there!”

Further details and updates on ticket exchanges and timing, as well as other teams updates can be found on the team’s respective websites at www.harbourcats.com and www.nanaimonightowls.com. Fans are also urged to sign-up for the e-mail lists of both teams and follow both teams on social media (Facebook, Twitter and Instagram) for all the latest news.