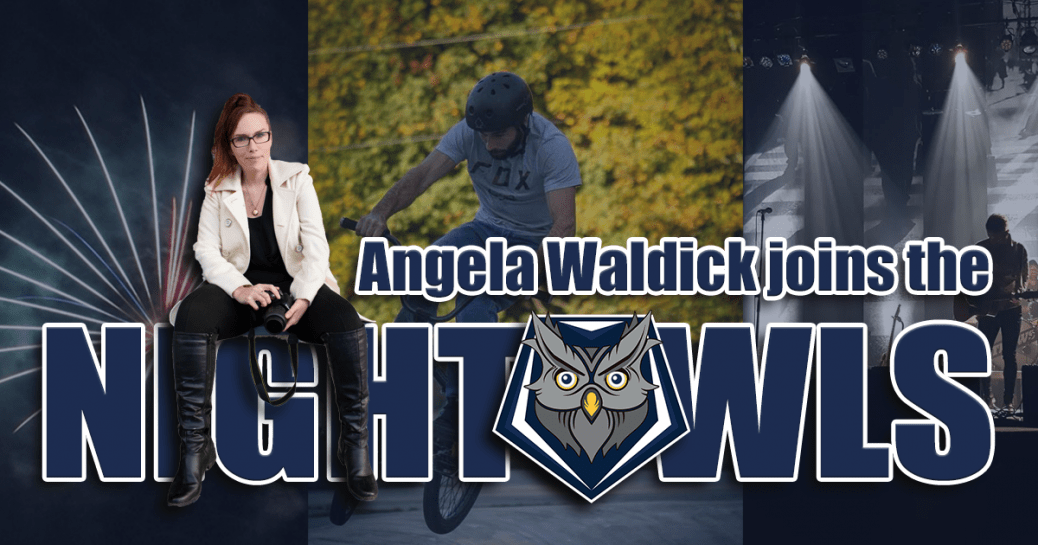 Never, ever count Angela Waldick out. Ever.

Angela Waldick believed to be the first legally-blind team photographer in sports history.

The Nanaimo-based and Island-raised photographer has been named the official photographer of the Nanaimo NightOwls (and Bars!), the West Coast League expansion team is proud to announce today.

The mother of two lost sight in her right eye five years ago, but refuses to be denied in continuing to run a small business called Nightengales Photography — and now, to provide images that will be an important part of the chronicling of the NightOwls team, whether at games at Serauxmen Stadium or with the team’s many planned community events.

A household accident damaged her eye. Team research has not been able to find another instance of team or sports media involving another legally-blind photographer.

“This is an inspiring story, of someone who overcomes all obstacles,” said Jim Swanson, Managing Partner/GM of the NightOwls, due to start WCL action this June. “Angela knows the community, she has an impressive and varied portfolio, and she more than deserves this opportunity. Angela will be an important part of the fabric of this team, and will keep every penny of photography sales — she’s earned that.”

Waldick has done action sports, and is excited to add to that skillset in her portfolio. Community, portrait and modeling photos are part of the repertoire of the former VIU student who has lived in both Victoria and Nanaimo. She will work closely with Victoria HarbourCats team photographer Christian Stewart to prepare for the season and ensure Vancouver Island’s top baseball operations are well-covered, and in particular that the community-first nature of the teams is shown through picture form.

Waldick came to the team’s awareness when she took photos of the team’s surprise January First evening fireworks, thanks in part to her children hearing of the quietly-promoted event that followed a successful food drive for Loaves and Fishes. The NightOwls, due to current health rules, received permission to do the fireworks, but were unable to make the public fully aware.

“This is a major step for me and my business, and I’m excited to join the NightOwls — and my kids are even more excited,” said Waldick. “This is a major addition to Nanaimo summers, and I get to take the pictures at such an historic stadium, and in the community. Those who know me know it doesn’t get any better than this.”

Anyone wanting to see some of Waldick’s work can visit her website at Nightengalesphoto.ca.