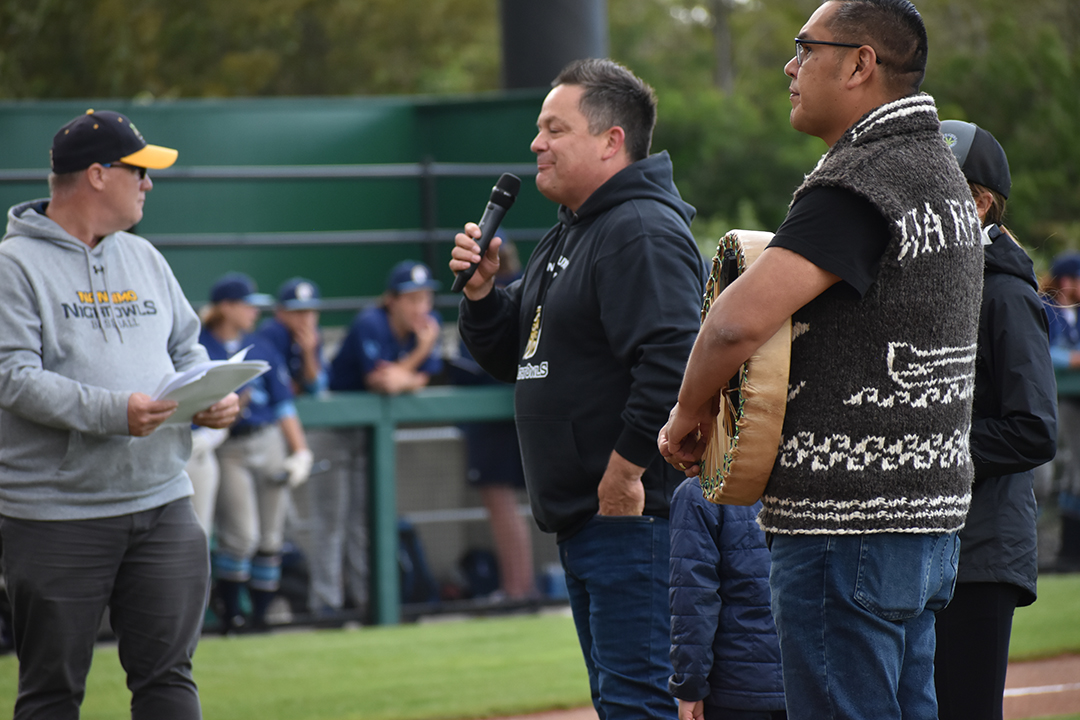 The fans, they were entertained. The coaches and players, they were impressed with the field and the atmosphere.

Historic-and-revamped Serauxmen Stadium — opened by Mickey Mantle and others in 1976, now complete with a unique-to-baseball 460 Realty Bathtub Bar in centre field — became a new must-see spot in the West Coast League on the weekend as the Nanaimo NightOwls took two of three games against fellow-expansionists Edmonton Riverhawks, a series interrupted but not quashed by moist weather.

A crowd of 1,926 took in the home opener on Friday, a chilly night with sprinkles all through the day — a crowd that cheered four pre-game skydivers, first pitches from dignitaries, and a drummed-welcome from the Snuneymuxw First Nation. The fans would refuse to give up until the final pitch of a 7-5 loss despite booming home runs to left field from Landon Frei (Utah) and local product Tim Holyk, a corner infielder. Another local product, right-hander Seth Gurr, started the first home game in NightOwls history, joined by more local players in outfielder Marcus Steen, catcher Connor Caskenette and infielder Aaron Marsh in the starting lineup.

Rain won Saturday, leading to a double-header (two seven-inning games) on Sunday to keep the WCL schedule flowing, games played largely due to tremendous work from the Serauxmen grounds crew.

In the first game, right-hander Carson Olsen (Cal Baptist) showed off his mid-90s fastball in fanning nine hitters in four innings, and lefty-hitting catcher Brock Molenda hit a three-run home run as part of a five-run sixth inning leading the NightOwls to a 9-4 win over the Riverhawks. The NightOwls had 12 hits, including a 3-for-3 day with three runs driven in by Holyk. Dylan Joyce, Garrett Ostrander and Logan Gibson also had two hits apiece.

In the series capper, extra innings came into play as the teams exchanged five-run innings late in the game — Edmonton’s big inning helped by a couple of Nanaimo errors. Marsh and Frei were both 3-4 and Marsh drove in three runs, but it was infielder Xander Sielken (Hawaii) who drove in the winning run in the 10th in front of more than 1,200 hearty fans. Two-way player Molenda, who caught the first game, earned the win in relief.

The NightOwls (3-3) now move south but stay on Vancouver Island to take on the Victoria HarbourCats (2-4) in what promises to be the start of an intense rivalry that will be as tough as any matchup in the WCL. Lefty Kyle Rosenfeld (Western Illinois) is slated to start the Tuesday game at Wilson’s Group Stadium at RAP, followed by Josh Fluet on Wednesday and Aiden Herrick on Thursday.

The next home action for the NightOwls is a weekend set against the Ridgefield Raptors, the first time a U.S. team will set foot on Serauxmen Stadium soil. Games are 6:35pm on Friday and Saturday, and 1pm on Sunday.

Tickets available through nanaimonightowls.com — click on tickets, or find great team merchandise for this first-year entry in the WCL.